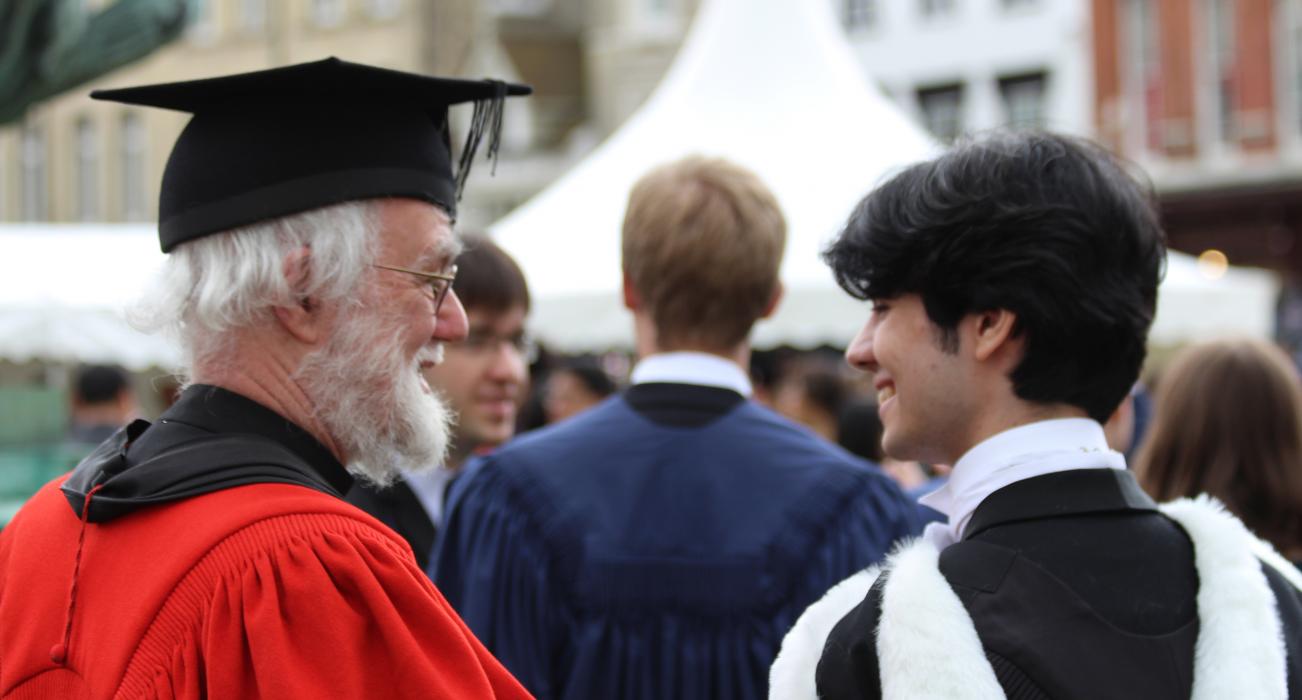 Rowan Williams, Master of Magdalene 2012-2020, has brought a very distinctive voice to the College: in the literal sense, of course - a voice which is immediately recognisable, humane, intelligent and generous, with a touch of the bard. And also, in the metaphoric sense: Rowan (as he likes everyone to call him) has represented the College through a period when having a voice in the University and in the wider world has never been more important. The values of the College are really of very little use if they remain private. Rowan knows them and he speaks them.

Part of the distinctiveness of this voice has been not just its warm timbre but also the words: words are very important in colleges. There are numerous requests to the Master to offer speeches on happy events, at moments of celebration, and on distressing occasions. To have a Master who finds the right words is a boon which it is truly hard to overestimate. Rowan had, of course, been used to ceremony: as Archbishop of Canterbury, he really got the hang of it. For us, though, following on from his life in this very different role, the striking thing was that nothing he says is just, to mix a metaphor, ‘painting by numbers’. Whether at a reunion or a matriculation dinner or in the chair at an intellectual symposium, Rowan is true to himself and principled.

All Rowan’s colleagues here in College know that the excitement - the challenge - of engaging with Magdalene are as much to do with celebrating diversity as to do with seeking coherence, as much to do with understanding and encouraging individual people’s hopes as to do with institutional ambitions; as much to do with newness as with oldness: our traditions go back both 600 years and about five minutes. What immense luck that Rowan as our Master understood this immediately, and intuitively; and was able to articulate it.

And when Rowan was appointed, what immense luck, too, that Jane Williams became a central part of college life. An academic of distinction, she has offered a presence in the lodge which has been both intellectually lively and also wonderfully calming. After a full day teaching in London, her willingness to rush back to Cambridge to offer the college’s guests for dinner a kind, interested and generous ear was hugely appreciated. The college is thrilled that Professor Williams has accepted an honorary fellowship, along with Rowan, to recognise her distinction as a theologian.

Rowan and Jane arrived in January 2013, moving into the Lodge and immediately maintaining the warm tradition of hospitality which successive masters and their partners have kindly and gently engineered. The masters lodge has been a place of thoughtful discussions, of music, of poetry (lots of poetry), and perhaps most of all, of balanced, nuanced and sensitive guidance which has benefited very many in the College -- from the most long-in-the-tooth officers to the incoming fresher on their first day. And Rowan and Jane’s academic distinction has enhanced the College’s intellectual life in small, local occasions, as well very obviously contributing majorly to our reputation in the outside world: whether as a voice on the radio or on TV, or through many books and essays they have been leaders of scholarship.

Talking of leadership; this is tested most at times of trial and challenge. The final chapter of Rowan’s mastership has seen something of a twist in the plot, worthy of a Russian short story. Not even Dostoevsky would have guessed a few months ago that farewells would be done by Zoom! Or that a question asked by a Magdalene fellow ‘what platform?’ would not be answered by ‘11b at Kings Cross’. But that is just a blip: the College has been fortunate to have Rowan at the helm at a time not merely of crisis but of uncertainty – it is much, much harder to deal with uncertainty than with crisis. Rowan, whose work with charities informs him of some of the worst tragedies of the modern world, nonetheless has shown immense compassion for students who missed their final term, couldn’t perform in an eagerly anticipated sporting event, couldn’t put on that play or that concert, couldn’t relax on the famous ‘beach’, couldn’t take their degrees in front of proud families and friends. Compassion is not finite: and even smallish disappointments need and respond to sympathy.

The real achievement of this mastership has been to help the College to be the place which could cope with uncertainty; just as it is a place that can manage its success. Despite all the dramas of the past months, the College has built a new library, raising funds from people who genuinely, and in a properly reflectively way, love and value Magdalene. Rowan has been a master for our international community, too, visiting alumni all over the world as a wonderful ambassador for the college.

And finally, the voice of the Master has also been heard in song, whether in Chapel or at the annual Parnell dinner, where Welsh lyrics gently nudged their way in among the Irish.

The College wishes Rowan and Jane every happiness in retirement (which we know will not be tending the roses) and Magdalene acknowledges a deep debt of gratitude.

For general enquiries please contact us via email or telephone. For specific department contacts, please see the contact directory.