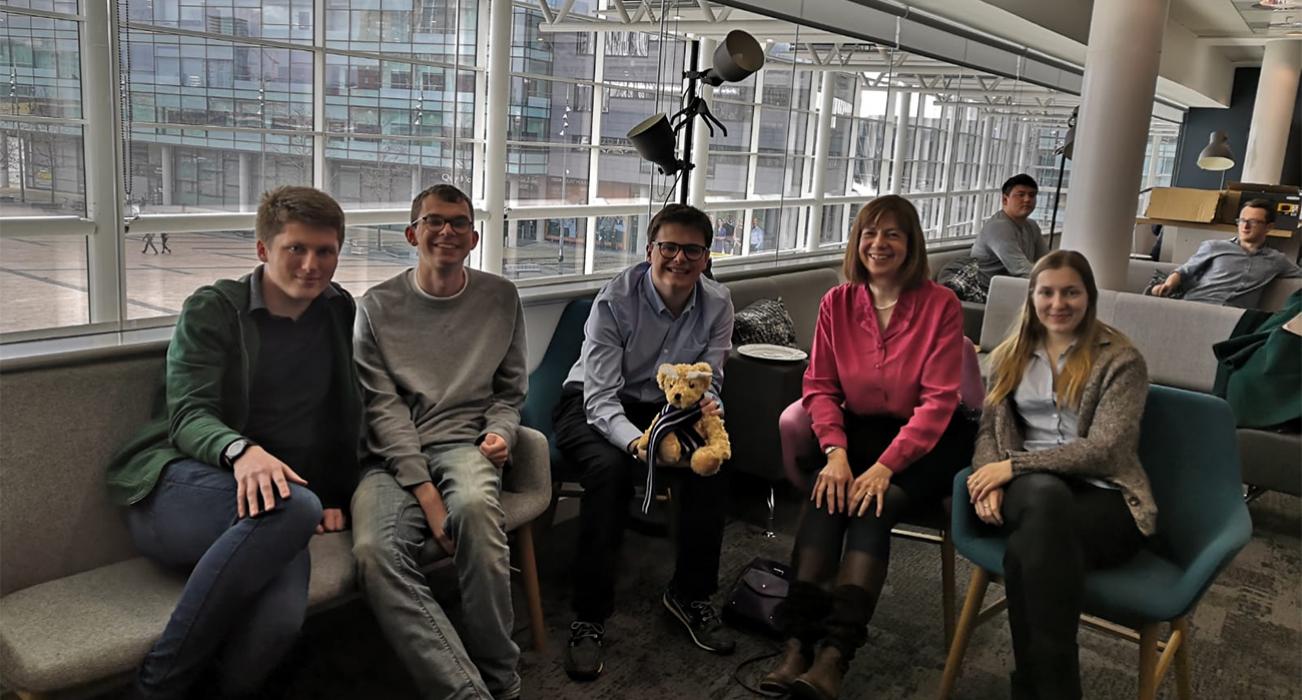 Behind the scenes with the Magdalene University Challenge Team

University Challenge, the academic quiz show where teams of students from across the UK universities answer questions on a huge range of subjects, first aired on ITV in 1962. Nine hundred and thirteen episodes between 1962 and 1987 were presented by quizmaster and Magdalene alumnus Bamber Gascoigne (1955).

Revived in 1994 by the BBC with Jeremy Paxman at the helm the fiendishly difficult quiz has become an iconic staple of British TV.

Series 50 of University Challenge is now well underway and having won their first quarter-finals round the Magdalene Team is now the only Cambridge College left in the competition. We caught up with team captain Daniel (digitally of course due to covid restrictions) to ask him how it all started, how it is going, and to find out all about their team experience so far.

Q. How was the team put together?

A. In Michaelmas 2019, we held a written test of one hundred questions in the Cripps seminar rooms on several evenings, with students dropping in whenever they could. It was intentionally difficult – 43% was the threshold to reach the second round of selection. We then held two evenings with five students each, answering University Challenge questions on the buzzer. It was incredibly close, with only a few answers separating those at the top.

When forming the final selection, we considered not just the number of correct answers, but the most complementary answers in producing a team that covered the widest range of knowledge.

The final team ended up as: me, Adam, Ceri, James, and Sasha as reserve. For two of the rounds, Sasha was trapped in France due to Covid-19 restrictions, and so Edwin Balani kindly acted as reserve. Adam and I had been on Magdalene’s team for the previous two years also, but had not made it onto the programme; James had tried out as a fresher the previous year but had not quite made it onto the team; Ceri and Sasha were new to Magdalene that term, so were trying out for the first time.

Q. Competition to get on the show is fierce, what is the application process like?

A. There are a number of forms to fill in, but the main hurdle is the interview, which Adam and I had experienced before. There is a casual conversation involved to allow the producers to get to know the team, but the most difficult part is a forty-question written test, where questions are read aloud in quick succession and there is little time to think. It is quite difficult to prepare for this test – we looked over things that had come up in previous interviews, such as Nobel Prize winners, and practised the speed element, but the rest is simply luck.

On the first day of Lent 2020, we went along to Corpus Christi, where we met two of the producers and one of the researchers, and were interviewed alongside the team from Churchill. It did seem to go better than it had in previous years, but I was not counting chickens – there was tough competition both inside and outside of Cambridge, with about 130 teams for 28 places.

Q. When and how did you find out you had made it onto the show?

A. At the end of January, I was in the common room at the Clinical School between GP seminars when I noticed I had a missed call from Manchester – I knew that it should be the day of decisions coming out, and that they only call the successful teams – so I knew we had made it even before I called back. I emailed the team to tell them the good news – along with Dr Brassett who had always been really enthusiastic about our applications to the show.

Q. How did the team practice for the competition?

A. Initially we considered what our strengths and weaknesses were and tried to think of any areas which we might need brush up. However, it quickly became obvious that this was not going to be a feasible approach! You can try to learn the things that commonly come up: Booker Prize winners, Chinese dynasties, the Mohs scale of hardness – but you soon realise that this task is never-ending, since there’s also Oscar winners, British monarchs, Irish counties, Shakespeare plays, Dickens novels, etc etc. Plus, whilst this sort of list-learning might gain you a few points, given the nature of the questions the vast majority of answers are obtained from things are already ingrained in your brain (especially if you need to respond quickly on the buzzer).

We therefore mainly just practised past questions, from the various University Challenge books available, and from questions transcribed from old episodes. Before social distancing restrictions, we did this in person, using buzzers borrowed from the Quiz Society. We also played practice matches against the other Cambridge Colleges who were appearing in the same series: Clare, Darwin, St John’s and Wolfson.

More recently all of our practice had to happen over Zoom, of course, apart from one very pleasant afternoon in Ceri’s garden when the rule-of-six permitted distanced buzzing and the eating of cake.

Q. What's it like getting ready on the day of filming?

A. Although we knew which Cambridge and Oxford teams had made it onto the show, and that an Oxbridge fixture would be likely for the first round, we had no idea which other teams would be taking part, nor how strong we were relative to them. You also don’t find out who you will be playing in each match until you reach the studio.

We travelled up to Salford on the train together, as we were being put up in a hotel the night before the recording. The number of questions I read at the team on the journey perhaps gave us away, as when we reached Manchester Piccadilly another passenger came up to us and asked, “Are you doing University Challenge?”. Practising quiz questions became an effective way of clearing the carriage on subsequent journeys, we learned!

At breakfast in the hotel the next morning, we saw a number of people from various teams, and I spotted some faces that I recognised. The people sitting next to us were from University College, Oxford, and had two very strong quizzers I knew from Oxford’s Quiz Society. We asked what their call time was, and it was the same as ours. We therefore knew who our opponents would be – and it didn’t look like it was going to be easy.

Q. Were the team nervous for your first-round match?

A. There is quite a bit of waiting around before going down to the studio which provides the perfect time for nerves to build. The set itself seemed very familiar – both from TV (only seeming much smaller!) and from having been in the audience to watch friends appearing previously. The only real surprise was how far we seemed to be sitting apart from each other at the desks, perhaps foreshadowing the separation by Perspex screens that was to come.

The production staff are all incredibly friendly and do their best to put you at ease, and you get a few practice questions before the filming starts for real, but I found none of this really helped with the anxiety and pressure of the real thing and Jeremy Paxman asking the questions. There are two aspects to the nervousness – the first is buzzing in with a completely wrong answer and being humiliated; the second is being so inhibited for the first reason that you are always beaten to the buzzer and so score no points.

It did feel like an incredibly long time before we scored any points – about 5 minutes in it turned out watching it back – but Ceri got us started with a powerful buzz on the Leviathan. It was pretty neck-and-neck until after the half-way mark, and we only really pulled ahead due to some bonuses on British rivers, and some film posters thanks to Ceri. We did feel a sense of relief once we passed 140 points, as we knew we would at least be back as highest-scoring losers. At the end, we felt that we had been extremely lucky to win by 40 points.

Q. How did the second-round match go?

A. In the second round, we knew that we would probably need to be on better form, especially as their captain (Seoan Webb) is an exceptional quizzer. I think all four of us felt that when, only 8 minutes from the end, we were trailing 115-55, we were consigned to being knocked out of the competition. However, we once again were very lucky, getting a series of starters on paintings, mountain ranges and anti-hypertensive medications which fell for us perfectly! Somehow, we had managed to get to the quarter-finals.

Q. Quarter-finals against the team with the highest scores, did you feel the pressure?

A. The first quarter-final felt very slightly more relaxed, perhaps because it wasn’t a straight knockout – however Birkbeck had achieved the highest score in both the first and second rounds, so we knew they would be tough to beat. I think we had the advantage of being very slightly faster on the buzzer on a few questions. Combined with Adam’s excellent buzz on ‘Elves’ (perhaps our favourite answer so far), James’s impressive knowledge of the geography of English counties and Ceri’s film and Biblical answers, we managed to pull ahead.

However, the next match would be against a team who also had won their first quarter-final, so we knew it would only get more difficult from hereon in.

Q, Who do you see as your biggest rivals on the show?

A. As we didn’t know all of the teams who were taking part in advance, and we only found out who we were playing just before each match, we didn’t think about this too much. In the second round we knew Corpus Christi, Oxford would be tough opponents, and that any of the teams in the quarter-finals would be difficult to beat.

Q. Any funny moments from filming?

Q. Every team has a mascot, can you tell us about yours?

A. My friends from College gifted me a teddy bear with a Magdalene scarf as a congratulations for making it onto the programme, for us to use as a mascot. We thought it would be appropriate to commemorate the outgoing Master, Dr Rowan Williams, and so Ceri’s sewing skills provided him with some fetching cotton wool eyebrows, and we christened him ‘Rowan’. For the later matches, James obtained a Magdalene crest online and created a bespoke face mask for Rowan.

Q. What has the support been like from the Magdalene community

A. We’ve had a lot of enthusiastic support from the Magdalene community – in Michaelmas, we held socially-distanced screenings of the first- and second-round matches in the Cripps Auditorium which were very popular. I’ve also had lots of congratulatory messages from students past and present, as well as fellows, including my DoSes and tutors. Whenever I go into the Porters’ Lodge now, it’s invariably the first thing that the porters ask about!

Congratulations to the whole team on their success and we wish them the best of luck going forward, you are all superstars in our eyes!

The Magdalene team will be taking on Warwick next on Monday 8 February. Keep an eye on the College social media channels (Facebook and Twitter) and we will remind you.

Congratulations to Magdalene from an old hand on success in the quarter-finals of University Challenge and best wishes now for the next two rounds. Show your opponents that nobody stands a chance when playing Magdalene.

The Magdalene team will be taking on Warwick next on Monday 8 February. Keep an eye on the College social media channels (Facebook and Twitter) and we will remind you.