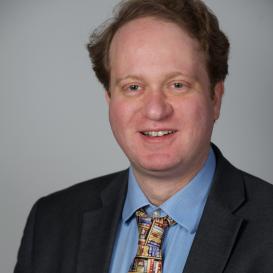 Richard studied Natural Sciences at Trinity, specialising in Phyiscs, and then gained an Mphil in Engineering on the topic of Silicon Nanowires. He has supervised in physics for 10 years, originally at Trinity and now at Magdalene, and particularly enjoys teaching, especially when it is possible to give demonstrations of the various effects, and explain the science behind them: he is a great fan of Feynman’s approach to developing physical “intuition” first, and then doing the mathematics.

Richard currently leads the Unipart Digital team, a group of 80 software and hardware developers working on 4th industrial revolution technologies for a major UK company, which just won a business-in-the-community award for sustainable development in the digital age.

Richard’s other interests are in music (choral and improvisation), and in engineering model aircraft. Richard owns a Wimshurst machine, and aspires to obtain a Crookes’ Radiometer that doesn’t run backwards.*

* i.e. one that is genuinely driven by the momentum of photons, rather than dominant thermal effects.