It is with great sadness that we inform Members of the death of distinguished Life Fellow, Professor William Cornish (1990). 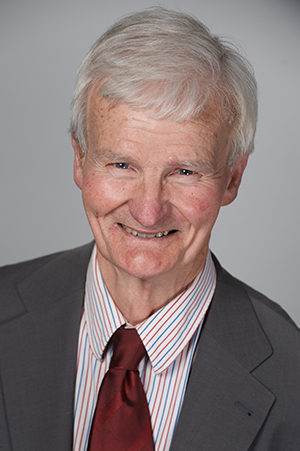 On learning of the sad news Sir Christopher Greenwood, Master of Magdalene, said:

“Bill Cornish was an invaluable member of the Magdalene Fellowship for over thirty years. A distinguished legal scholar, he made an enormous contribution to the development of the law on intellectual property and played a leading role in aid to East European universities after the end of communist rule. Yet he always found time for the College which he served in so many ways, especially during his time as President. He will be greatly missed by all of us.  Our thoughts are with his wife, Lovedy, and family.”

“Bill was everything one might have asked for in a Fellow and Colleague.  He was devoted the College and a great believer in the importance of a strong sense of community for the Fellowship.”

A South Australian, who spent most of his career in England, W.R. Cornish, always known as Bill, made ground-breaking, even subject-creating, contributions to the study and teaching of the law of intellectual property in the UK, while simultaneously making a major contribution to modern English legal history and to assistance to Central and Eastern European universities following the end of Communist rule.

The seeds of two abiding themes in Bill’s work had been sown before he began his undergraduate legal studies: an interest in legal history and the social context of the law, and a commitment to links between the common law and the legal systems of continental Europe. Born in Adelaide in 1937, Bill grew up and embarked on his study of law at a time at which the legal profession in South Australia still lagged in importance and size behind its counterparts on the eastern seaboard, a consequence of colonial history and of legislation in the 1850s which had removed conveyancing work from the lawyers and vested in it land agents, the effects of which impinged both upon Bill’s father’s career as a solicitor and upon Bill’s first legal education at the University of Adelaide.

Finishing school at St Peter’s College, Adelaide, in 1955, Bill travelled to England for a gap year, working in London – where he was shocked by the war damage in the East End – as an assistant to the Revd P.T.B. (Tubby) Clayton, founder of the Toc H servicemen’s clubs, travelling with Clayton and cycling in France, experiences which changed Bill’s perspective, leading to his return to England in 1960, following his Adelaide LLB, to read for the postgraduate BCL degree at Wadham College, Oxford, as a British Commonwealth Scholar. In 1962 he moved to an assistant lectureship at the London School of Economics, where he was to remain – aside from a year at Queen Mary University of London – until 1990, being promoted to professor at the young age of 33 and taking a major role in the School’s administration.

The LSE law school of the 1960s was looking to do new things in legal education, to make it more socially aware and critical, an approach exemplified by Professor L.C.B. Gower’s formative work on company law. In this context emerged Bill’s 1968 book Trial By Jury, which aimed to begin to open up the workings of the jury system to public inspection. And from Bill’s interest in the promotion of new subjects unknown in English law schools came his pioneering work, encouraged by Professor Otto Kahn-Freund, on the law of intellectual property, the starting point for the flowering in recent decades of teaching and research in intellectual property law in the UK. Bill’s intellectual property project began in the late 1960s with a path-breaking LLM course at LSE, followed by an undergraduate course, and then, in 1981, the publication of the first of edition of his classic leading text Intellectual Property: Patents, Copyrights, Trade Marks & Allied Rights, now in its ninth edition. In 1984 Bill was elected a Fellow of the British Academy. Early in his time at LSE, Bill also began work with Geoffrey Clark on a modern legal history textbook, which would put legal developments into their social and economic contexts. After Clark’s untimely death in 1972, it was left to Bill to execute the project, which led to the publication of Law and Society in England, 1750-1950 in 1989. In the same year, Bill was appointed an external academic member of the Max Planck Institute for Intellectual Property and Competition Law in Munich.

In 1990 Bill moved to Cambridge, succeeding to the chair of his former colleague, the distinguished legal historian S.F.C. (Toby) Milsom, who had left LSE in 1976, and taking up his fellowship at Magdalene, holding office as President between 1998 and 2001, and being responsible for organising the visit of Nelson Mandela to be admitted as an honorary fellow.

Two commitments soon after his arrival in Cambridge influenced the future course of Bill’s work. One was his appointment as the founding director of the Centre for European Legal Studies in the Faculty of Law, from where, following an approach by Judge George Dobry, he was instrumental in founding the British Law Centre at the University of Warsaw, now approaching its thirtieth anniversary, to provide courses on the common law, taught in English with English approaches, to students from Central and Eastern Europe in the aftermath of the breakdown of Communist rule; work which was recognised in 2013 by his appointment as a Companion of the Order of St Michael and St George. The other was Bill’s assumption of the leadership of a project to produce a three-volume study of the history of English law between 1820 and 1914, in the Oxford History of the Laws of England series, co-written with Professors Stuart Anderson, Ray Cocks, Michael Lobban, Patrick Polden and Keith Smith. The volumes appeared in 2010, after Bill’s retirement, but had roots in his earlier work on modern English legal history.

Bill’s pre-eminence in the field of intellectual property was recognised in his chairing of the National Academies Policy Action Group Working Party on Intellectual Property, which reported in 1995 on intellectual property and the academic community, and in the same year by his election to the newly-established Herchel Smith Professorship of Intellectual Property Law at Cambridge, from which he retired in 2004, together with the conferral of an LLD by the University of Cambridge and of honorary doctorates by the Universities of Edinburgh and Adelaide, the chairing of a number of British and international associations in his field, and honorary appointment as Queen’s Counsel, call to the Bench of Gray’s Inn, and appointment as an Honorary Fellow of the LSE.

Bill was a man of wide culture, learning and friendships, a committed pianist and musician, a leading figure in modern English legal history and widely and rightly regarded as the father of the teaching and study of intellectual property law in the UK, a South Australian with deep links with Europe in its widest sense, and a supportive, wise and generous colleague. In his death the legal academy loses one of its major figures of the post-war era.

He is survived by Lovedy, his wife of many years, and their children Peter, Anna and Celia.