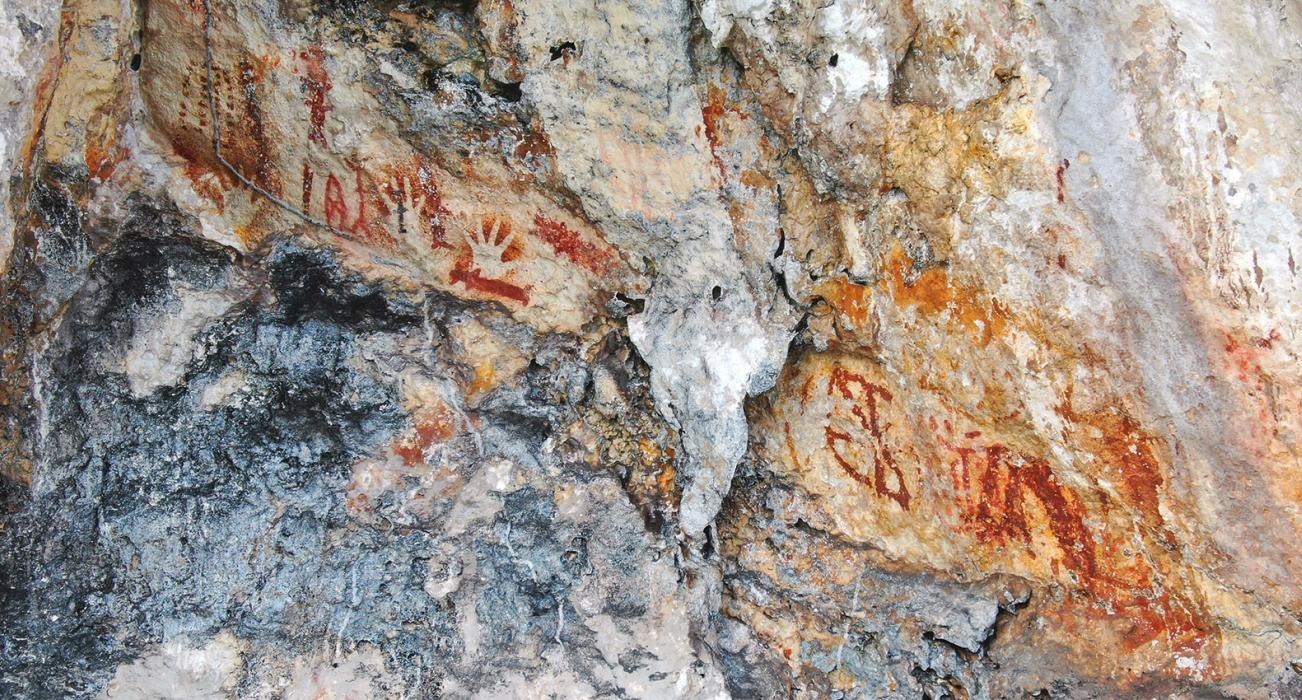 Bye-Fellow in Archaeology, Mr Dylan Gaffney (2017), writes about his research directing a field project in an archaeologically uncharted island group off the western coast of New Guinea.

Over the coming century, it seems certain that humans will have to adapt to a changing climate. We will need to innovate novel behaviours and new technologies to respond to anthropogenic increases in temperature, rising sea levels, changes to forest cover, and the extinction of fauna. But this is not the first time in our species’ history that we have been confronted with climate change. What happened when the earth began to warm towards the end of the last Ice Age, about 20,000 years ago, and what can we learn from how our ancestors responded to this climatic change?

Our collaborative archaeological project in the Raja Ampat islands at the far western edge of the Pacific Ocean is attempting to shed light on some of these questions, delving into what made Stone Age hunter gatherers so readily adaptable and behaviourally flexible in response to environmental change. Humans have been living in the region for somewhere between 40,000–60,000 years, but when sea levels rose by about 120 metres at the end of the Ice Age, vast stretches of the Australian and Asian continental shelves were inundated, creating new islands and encouraging the growth of littoral and estuarine environments.

In fact, the large continent called ‘Sahul,’ consisting of Australia, New Guinea, Tasmania, and the Raja Ampat islands, was split apart during this time, while the ‘Sunda’ shelf of peninsular Southeast Asia fragmented into the islands of Borneo, Java, and Sumatra. Moreover, with increasing temperature and precipitation, equatorial rainforests expanded into new areas that were formerly savannah. Megafauna such as the Diprotodon (a marsupial the size of a hippopotamus but closely related to wombats) became extinct in the area, probably in part due to the restriction of their grassland habitats, as well as hunting and landscape burning by early humans.

To investigate how humans responded to these dramatic changes, two seasons of Raja Ampat fieldwork were completed in collaboration with Indonesian and West Papuan archaeologists, and members of the local community. Our team spent two months in early 2018 mapping and recording archaeological sites in the archipelago, noting the presence of over 150 new sites, including several enormous caves and rockshelters. This involved coastal reconnaissance around limestone karst systems, along with ground surveys in the rainforested interior of the islands. Aerial drones were used to produce imagery of the surrounding landscape and to map sites that could not be accessed by foot. A key part of this research has been to examine raised coral reefs and ‘tidal notches’ in the limestone which can give clues to tectonic uplift relative to past sea levels.

Later in 2018-2019, our team undertook four months of archaeological excavation at three of the largest recorded cave sites, uncovering stratigraphic deposits that have now been radiocarbon dated back to the last Ice Age. By digging systematically, centimetre by centimetre, we are able to carefully map the artefacts and fossil/bone remains in three dimensions and correlate them securely with deposits of known age. These kinds of excavation in the Pacific are always community events and involve working closely alongside local landowners, custom leaders, and enthusiastic members of nearby villages.

Laboratory analysis of the excavated material is now underway. We hope to describe how the local environment has changed since the last Ice Age, and how humans adapted their technology and foraging behaviours in response. Bone isotope and palaeobotanical analyses in collaboration with specialists in Germany and Australia are helping to reconstruct local palaeoenvironmental sequences. These will be correlated with analyses of stone tools, bone points, and shell artefacts that I am currently undertaking at the Department of Archaeology to investigate whether humans innovated new technologies to respond to rising sea levels, insularisation and the expansion of tropical forests. Zooarchaeological analyses of the fossil bone assemblage is already shedding light on how humans changed their animal hunting strategies, with provisional results showing that people responded to an unpredictable climate and an island way of life by focussing their hunting on smaller but more predictable game such as fruit bats, cuscus, and large murids.

As we carry on further into the twenty first century, the low-lying Pacific Islands are again on the front line of global sea level rise. The thing that will mark the coming century as unique in human history will perhaps be the rapid nature of the changes. Whether present-day humans respond with the same behavioural flexibility that our ancestors seemingly did remains to be seen, but by examining the deep interwoven history of human adaptation and climatic change we can get closer to understanding our species’ capacity for novel innovations and transformative responses.