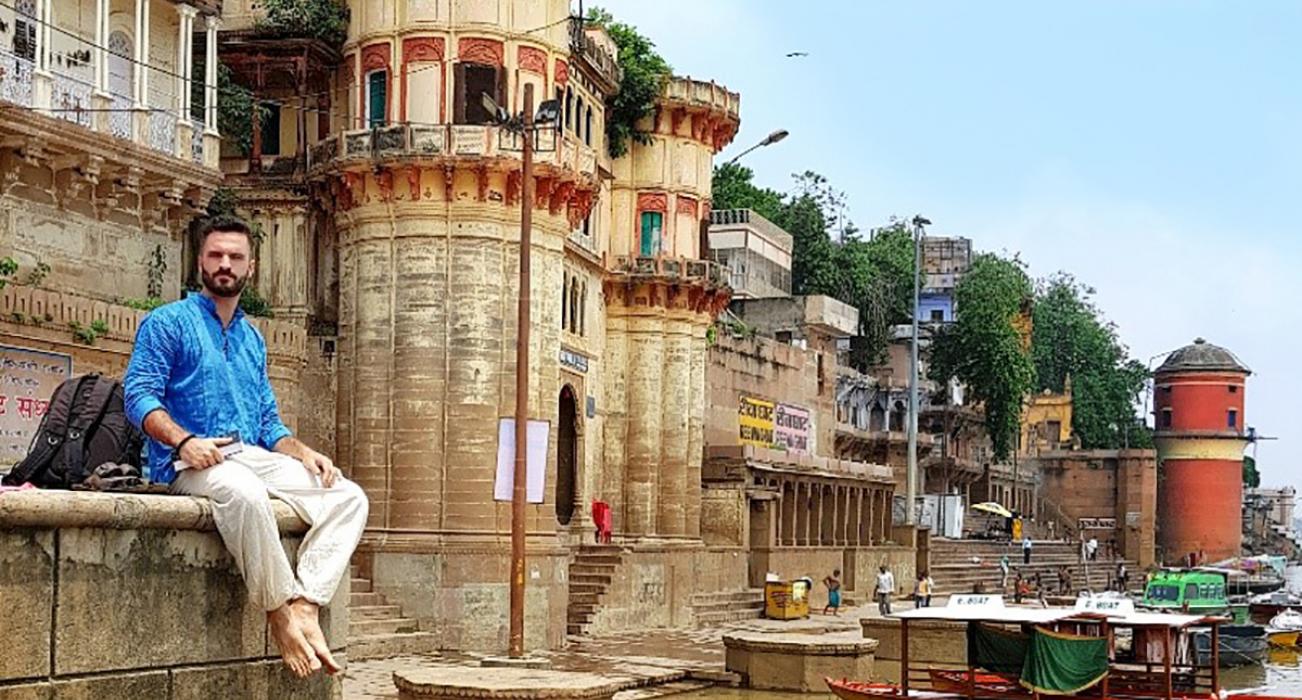 From Magdalene to the Indus Civilisation: Archaeological Research in India

For my PhD research, under the supervision of Dr Cameron Petrie, Prof Charly French and Dr Patrick Quinn, I am working on producers, crafts and technologies of the Indus Civilisation (2500–1900 BC) in northwest India.

Simply put, I spend a lot of time looking at fragments of ancient pottery. I use a range of technological and compositional techniques to study ancient ceramic industries, including various analytical procedures. I analyse ceramic powders and thin-sections taken from pottery sherds to investigate sources of materials used for manufacturing ceramic vessels; this also allows reconstruction of how the vessels were produced. Combining multiple analytical methods with traditional visual observations of the ancient pottery, I am investigating ceramic traditions to understand aspects of Indus communities and their behaviour.

The first part of my job actually begins in the field, more specifically in Haryana and Uttar Pradesh, India. From excavations at Indus sites to the study of archives of archaeological material within India, I’ve had the opportunity to spend the past year working in India alongside a team of researchers jointly from both Cambridge and Indian universities.

One of the Indian cities where I spent the most time was Varanasi. Varanasi is like a vision of India rising out of your most fervid imagination. One of the most ancient living cities in South Asia and located on the shores of the Ganges, it is home to thousands of temples, which rise like spiritual archaeological researc h in India From Magdalene to the Indus Civilisation: bastions emerging from the daily pandemonium of crowded streets. Children, merchants, rickshaws, monkeys, cows and water buffalos are everywhere; locals and pilgrims offer flowers and floating candles to the river-goddess Ganga, while fire rituals take place all around. This is the richness of Varanasi.

Besides being a major centre of research, owing to its spiritual and religious magnetism, people from all over Asia have visited Varanasi for over two millennia. For Hindu devotees, this is a place for the living, for knowledge and prayers, but also a place for death. The famous burning ghats (riverfront steps leading to the banks of the Ganges) host funerary pyres, which are often seen as the physical threshold to the afterlife and salvation. However, Varanasi is not just one of the holiest cities in Hinduism (Kāśī, City of Light); it is also strongly connected to the development of Buddhism, Jainism, Sikhism, and Islam in India. Influential individuals belonging to several sects are believed to have sat on these riverbanks, including the Buddha (Buddhism), Suparshvanatha (Jainism), Kabir, Ravidas, Tulsidas and Meera Bai (Sant Mat, Kabir Panth, Bhakti and Sufi movements), Adi Shankaracharya (Advaita Vedanta), Guru Nanak (Sikhism), Anandamayi Ma and Lahiri Mahasaya (modern Yoga). These are just a few examples of the inter-cultural and inter-religious ancestries of this unique city, but most noticeable is how these diverse spiritual landscapes harmoniously interlock and overlap. In the words of Vivekananda (1893), Varanasi is an example of how India can teach “the world both tolerance and universal acceptance”. I had previously lived in South Asia for a few years, but it still felt like a privilege to be exposed to such a rich melting pot of ancient traditions.

Speaking of which, pots and ancient traditions were part of my research in Varanasi. I spent most of my time in the laboratories of the Department of Ancient Indian History Culture (AIHC) and Archaeology at Banaras Hindu University (BHU).

Before departing to India, I assembled a portable laboratory for sampling ceramics. In Varanasi, I finally had the chance to test the laboratory in the field, and it worked perfectly.

While I was there, I analysed and documented pottery sherds from Indus sites in present-day Haryana and Uttar Pradesh with a team from the AIHC University, produced thin-sections for petrographic analysis, and collected powdered ceramic samples for geochemical analysis, as well as producing new illustrations of the pottery. Each morning, bags of ancient pottery waited on the table ready to be studied. Each sherd of pottery tells us about the skills and technologies of the Indus potters, information about its maker(s) and the village(s) where it was crafted. They are not just fired pieces of clay, but the physical manifestation of the intimate relationship between society, makers and materials.

I also had the chance to leave the laboratory and visit modern communities of traditional potters who live in small villages in Haryana and Uttar Pradesh, northwest India.

My ethnographic, or ethno-technological, research is helping me think about archaeological questions and problems related to issues of rural ceramic production and regional networks of potters. There are many aspects of ancient ceramic industries in South Asia that can benefit from research on modern traditional potters, for instance the interaction with landscapes and changing environments, the transmission of knowledge within families through generations, the network of crafters connected via marriages within India’s caste system, the seasonal production of ceramic artefacts, social identities and the roles of women and men in the production of vessels, and a comparison between archaeological and modern rural tools and technologies.

It took me a while to understand the complex interaction among groups and subgroups of Kumhars, who are the traditional potters of Rajasthan, Haryana and Uttar Pradesh. Nonetheless, I was lucky to meet friendly families of potters and learn from them while drinking a lot of chai tea.

Nowadays, the village-based manufacture of pottery is slowly disappearing, due to lack of demand and modern systems of mass-production. However, new generations of Kumhars maintain the long-lasting traditional craft of specific types of vessels that seem to be particularly close to the hearts of local families. In fact, they still produce vessels used during Hindu festivals and rituals (eg Diwali, the festival of lights, or weddings) typical ceramic water jars (matka) and drinking cups.

Talking to these potters allowed me to understand aspects of the production and distribution of vessels, from clay sourcing to firing and commercial transfer of final products. Amongst the problems that archaeologists, and especially ceramic specialists, face when researching ancient artefacts is the study of forming techniques or manufacturing processes. Observation for this ethnographic work helped me to fill some of the gaps in my general understanding of pottery making in India, but, most importantly, it also helped to look at the landscape, adaptation to seasonal climate variability and rural family traditions with different eyes – the eyes of long-lasting lineages (parampara) of crafters.

Besides the obvious anthropological and archaeological implications of this work, it was rather fun and inspiring to visit those villages and families. Potters from Khanak, Lohari Ragho, Rakhigarhi and Alamgripur were very happy to share their experiences and stories of their ancestors with the public, which is a vital source of vernacular knowledge that would be otherwise inaccessible. These traditions are an important part of the intangible cultural heritage of South Asia.

By Alessandro Ceccarelli
Alessandro is a Magdalene PhD candidate and archaeologist and ancient ceramics specialist for the ERC TwoRains Project at the Department of Archaeology.

If you would like to read more about his research please visit his section on the TwoRains Project website.