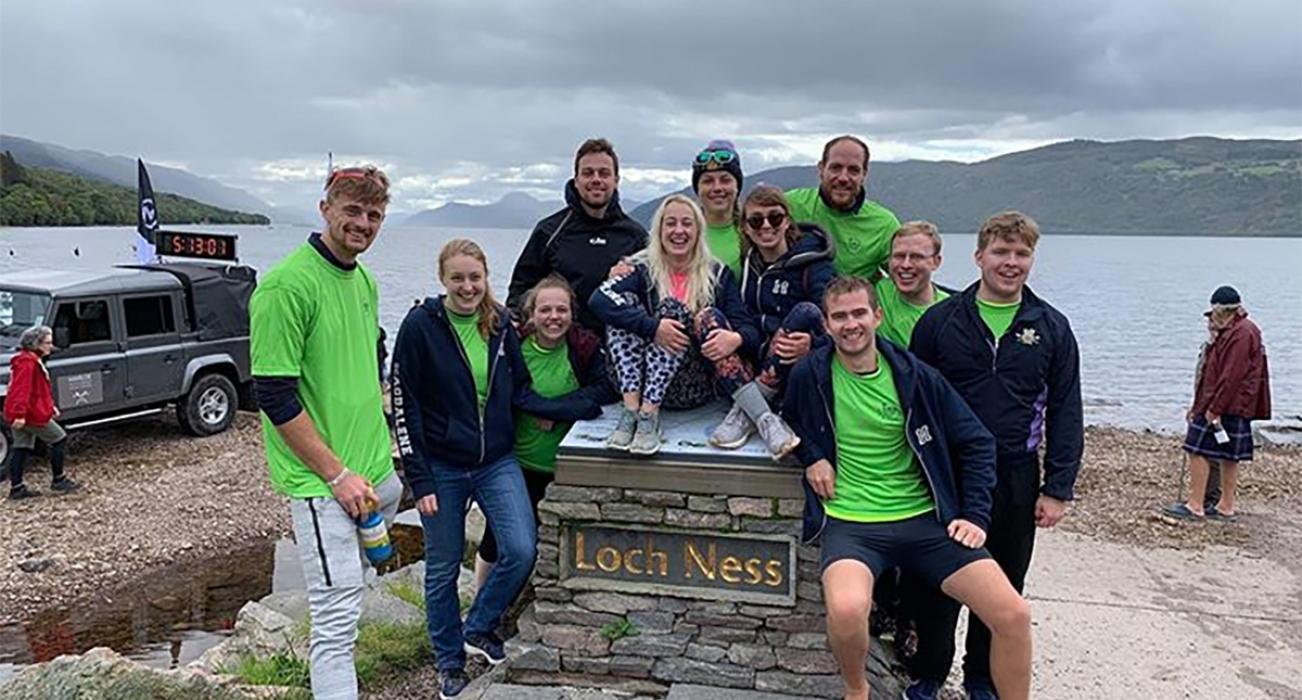 And through that mist, between the steep ramparts of the Scottish Highlands, gracefully paddled Wallace the lavender rubber duck towards the start line taped to the bow of Bishop Simon. The Monsters of MBC were ready. 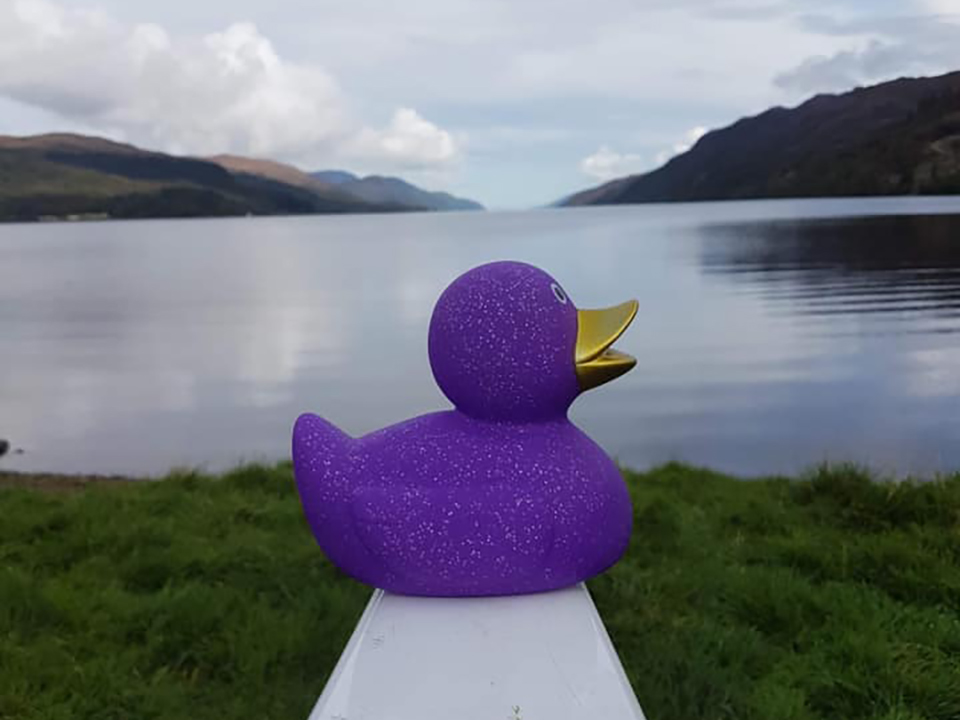 Eleven members of Magdalene Boat Club and the Mallory Club had taken on the challenge of taking on the challenge of Monster the Loch, rowing the entire 34km length of Loch Ness. With matriculation dates ranging from 2004 to one crew member moving into College for the first time the week after the race, a completely scratch crew of rowers turned up and said “Yeah, why not?”.

We lined up alongside pilot gigs, kayaks, skiffs and for some reason the Team GB development VIII (there goes the chance of winning then . . .). And then . . . GO! 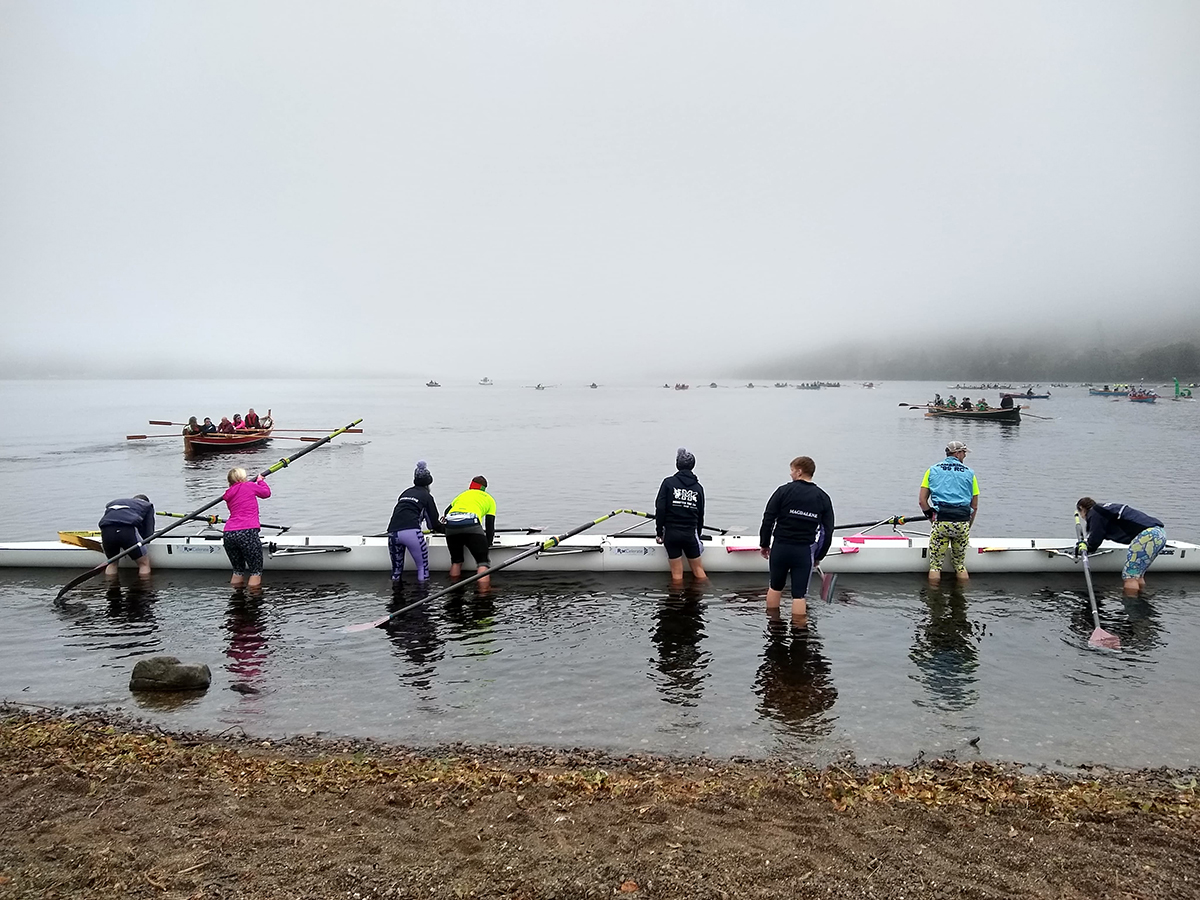 A fast 20 strokes before settling into a strong low rate meant we quickly left the fleet behind with only a double kayak for company as GB went off ahead of us. Holding second place until the halfway point, we made a hasty pitstop to swap some rowers and take on banana-shaped fuel before setting out to take back the positions lost while pulled in at the beach. 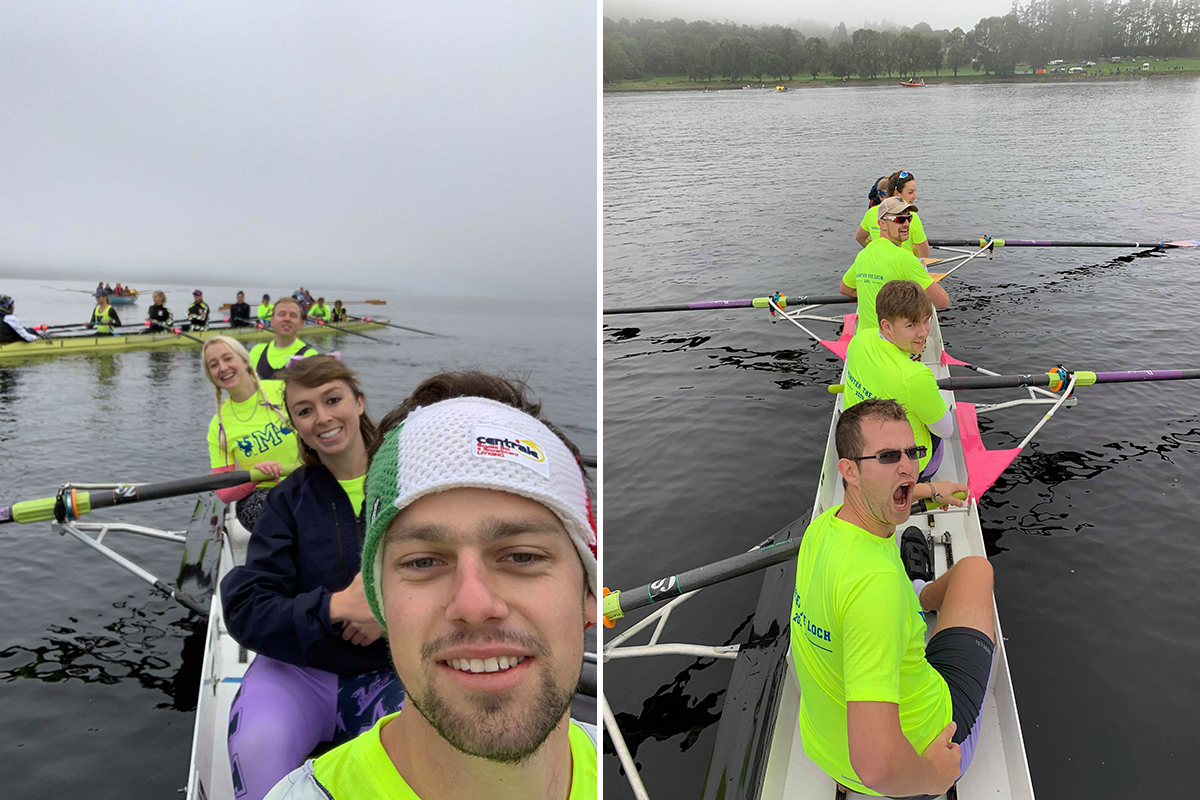 Then Nessie stirred. The waves got bigger. The wind got wilder. Our little hand pump was constantly being thrown around the boat to bail out the footwells as the taped-over riggers became overwhelmed by the water. Issy the cox was essentially having a bath. Wallace was the first casualty, being swiped off the bows as a collective cry from the crew saw him drift away to his fate. 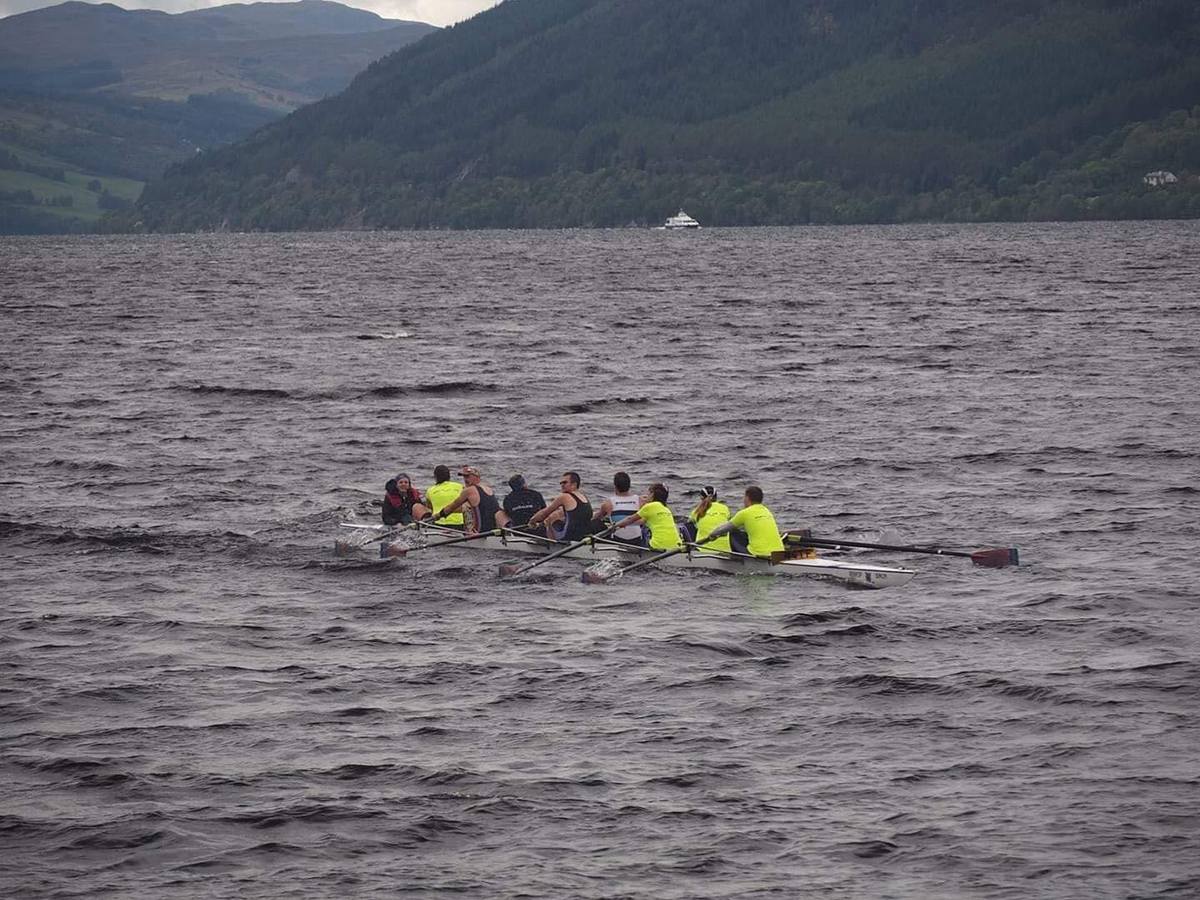 Thoughts turned to the promise of the barbecue and beers at the finish line as we crashed through the breakers. We picked off those crews that had overtaken us, and began sprinting towards the end. Sounds of clapping. Cheering. We turn around and see a giant clock reading 2h 39 as we drive past the pub and onto the beach where all the additional snacks we had pointlessly taken with us were devoured. 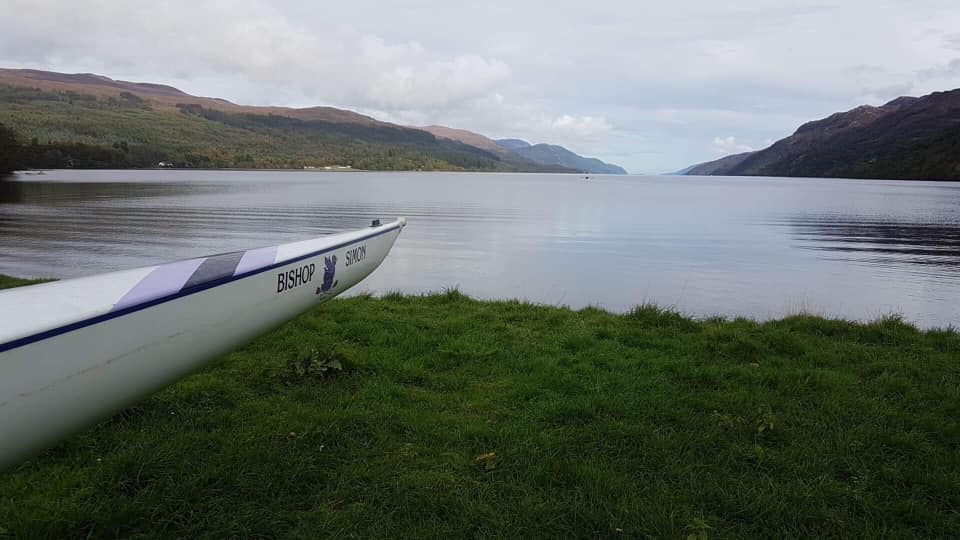 After an eventful hauling of the boat out of the waves, we learned our actual time was 2h 30 and we had crossed the finish line 9 minutes earlier than we thought. Something to bear in mind for next time . . .

All in all, a great weekend away for MBC members past and present and plans to race again next year are already afoot. If you would like to take on Nessie, or get involved with any other activities throughout the year with the Mallory Club, please get in touch via info@malloryclub.com and be sure to find us on social media as well!

The next opportunity to race will be the Fairbairn Cup on Friday 6 December. This timed race is open to both IVs and VIIIs and would be a great chance to meet up with all your old boatie friends! 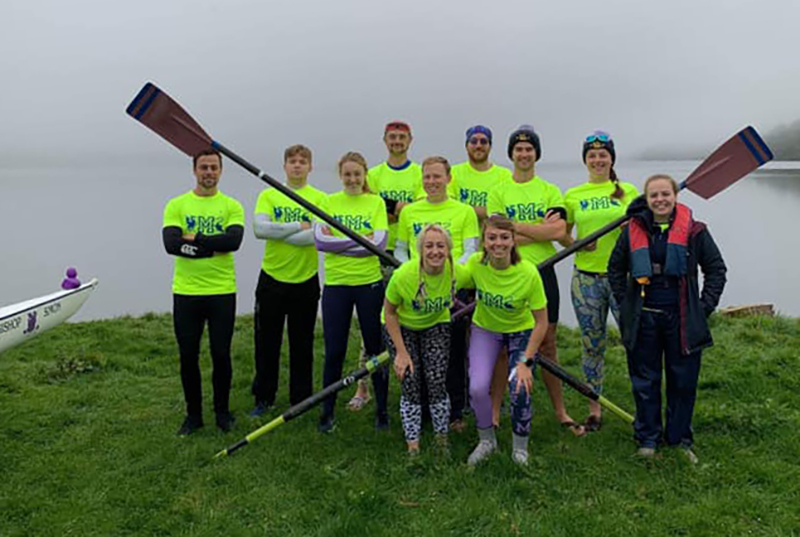