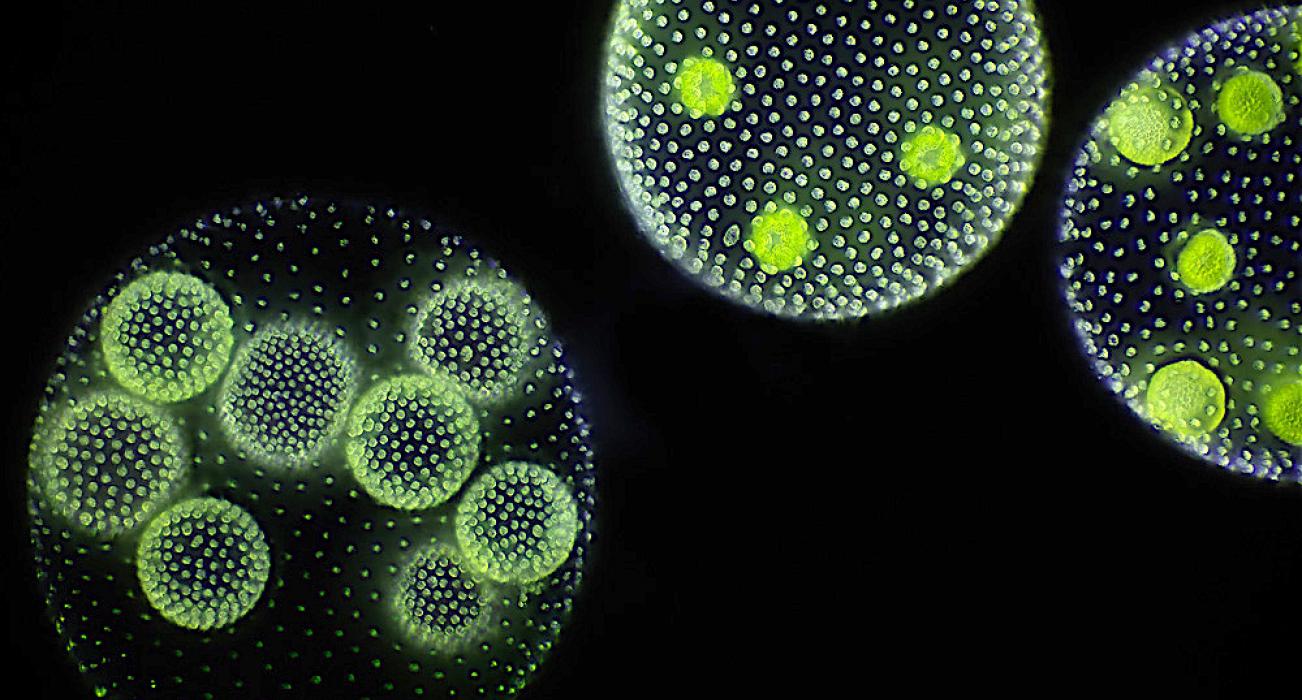 Upside Down and Inside Out: Inversion in Volvox

“It is not birth, marriage, or death, but gastrulation which is truly the most important time in your life.” - Lewis Wolpert

Gastrulation is the process, in humans and other animals, during which a spherical mass of cells punctures to prepare the formation of the gut. It is just one of many events of cell sheet folding and cell division that turn a single cell into an animal, with all its cavities and orifices. The first paper on these questions of morphogenesis is probably a letter to the Royal Society in 1666, describing the birth of a “monstrous calf” in Hampshire. Over the course of the ensuing centuries, natural philosophers became biologists and identified (non-bovine) model organisms, such as the fruit fly, in which they could study morphogenesis and unravel its genetic basis.

Understanding these model systems for morphogenesis is crucial because it helps with understanding human birth defects. It is important, however, to recognise that the ultimate cause of such congenital anomalies is mechanical: a cell sheet does not fold in the correct way because for some (possibly genetic) reason, the mechanical force exerted on it is outside the correct range. Studying the mechanics of morphogenesis remained difficult for a long time, however, not least because of a lack of experimental model systems that were sufficiently simple to be amenable to a physical, mathematical description.

Over the last few years, we have identified the inversion of the green alga Volvox as such an experimental model system: Volvox is a spherical colony of a couple of thousand cells, each with two flagella, the coordinated beating of which drives the swimming of the colony. On the inside of Volvox are germ cells that divide into the embryos of the next generation of Volvox. However, it so happens that, at the end of cell division, those ends of the cells that will grow flagella point into the sphere. In order to be able to swim, the colony must therefore turn itself inside out through a hole at the top of the cell sheet. This process is called inversion, and proceeds in different ways (type-A and type-B inversion) in different species. (It is not clear why Volvox evolved to have its flagella on the inside after cell division: the closely related alga Astrephomene divides into spherical colonies without the need for inversion. In fact – to add insult to injury as it were – although one might expect not having to undergo inversion to constitute an advantage, Astrephomene has at most 128 cells, and hence has not evolved to the same complexity as Volvox, which may have tens of thousands of cells.)

Volvox inversion is driven by a programme of cell shape changes: different cells undergo different shape changes at different times, but the key cell shape change is the formation of wedge-shaped cells. These cells are thicker at one end than at the other; this splays the cells and thereby bends the cell sheet. We have shown, in a series of papers, how Volvox can be described as an elastic shell, with the cell shape changes modifying the intrinsic geometry of this shell. This model can quantitatively reproduce the shapes of inverting Volvox embryos, and predict the forces exerted on different parts of the cell sheet. These predictions are now being tested experimentally by cutting experiments. We hope that the mechanical insights gained from a simple process such as Volvox inversion will ultimately further our understanding of similar processes in higher, animal model organisms, and even of birth defects in humans.

Fig. 1. Volvox and its inversion. (a) Volvox colony: small dots on the surface are flagellated cells; green balls are daughter colonies with darker germ cells inside that will eventually divide into grand-daughter colonies.  (b) Inversion in Volvox. In type-A inversion (top), four lips at the anterior pole flip over and peel back to achieve inversion; in type-B inversion (bottom), an invagination at the equator allows the posterior to invert before the anterior peels back over the inverted posterior. Light sheet microscopy image in panel (a) by Stephanie Höhn. Panel (b) modified from Höhn et al., Phys. Rev. Lett. 114, 178101 (2015).