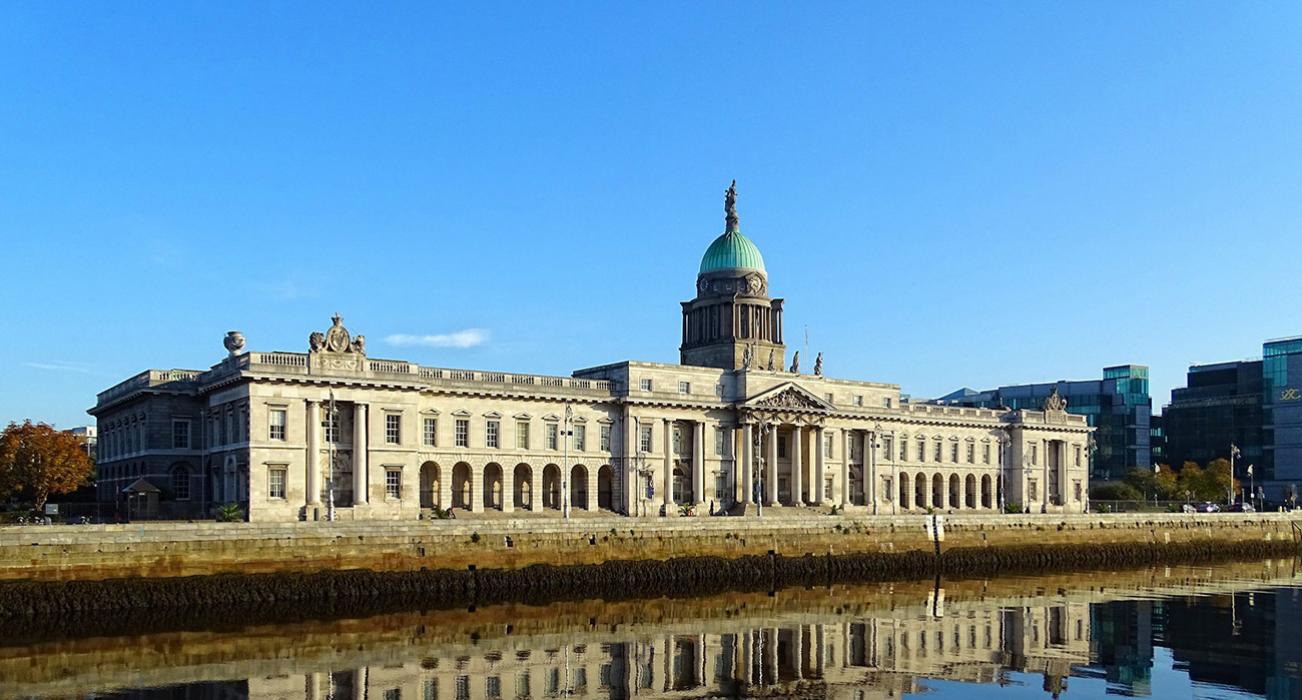 Charles Stewart Parnell is widely known as a figure of world significance in the history of nationalist politics. Less well known is his passion for patriotic enterprise, in particular quarrying on his County Wicklow estate.

From 1884 until his death in 1891 he employed 200 sett dressers preparing paving for the streets of Dublin. The material and artisanal dimensions of Parnell’s industrial ambitions align with my current research on the role of craftsmanship in 18th century architecture. This article therefore takes its cue from Parnell’s preoccupation with native resources by addressing the subject of stone usage in the creation of Dublin’s monumental classical architecture. I argue that procuring and fashioning of stone are as eloquent as the processes of patronage and design which have hitherto dominated the history of Anglo-Irish architecture.

My focus is the ceremonial centre of the capital city, College Green, seat of the Dublin Parliament House and of Trinity College, closely connected institutions whose design and execution set the standard for the city’s precocious public architecture of the period, a phenomenon partially enabled by a determination not to return unspent revenue to London. The Parliament House, since 1801 the Bank of Ireland, is considered ‘the greatest of all physical monuments to the Ascendancy class’. Commentary on the building has focused on three key issues: the quality and originality of the building, particularly in contrast to the then shabby accommodation at Westminster and the respective roles of William Conolly, Speaker of the House of Commons, and his architect, Edward Lovett Pearce, in its design and achievement. Contemporaries proclaimed it ‘spacious, elegant and convenient much beyond that heap of confusion at Westminster’ while historians have weighed its grandeur against the relatively modest powers of the Dublin Parliament, finding therein an overstatement which is mirrored in the remarkable scale of public building in Ireland in the period. When in 1731 the Dublin Parliament met in its newly completed chambers, designs for a new Parliament House at Westminster were mooted but none came to fruition. It would take a devastating fire a century later for Westminster Palace to be rebuilt. The speed and efficiency with which the Dublin Parliament House was achieved was undoubtedly due in large part to William Conolly who was also a dominant member of the Revenue Commissioners, Privy Councillor and one of Ireland’s three Lords Justices. Conolly’s authority was combined with the talents of a young and brilliant architect who was a cousin of Sir John Vanbrugh. His design was an inspired synthesis of Antique and Palladian exemplars which produced what is arguably the most original public building of the Palladian Revival in any jurisdiction. However, the failure of British architectural history to position the Parliament House within wider narratives of 18th century classicism has provoked frustration among Irish architectural historians, most recently Conor Lucey for whom it was ‘commissioned by the wrong parliament, designed by the wrong architect… situated in the wrong city on the wrong island…’ and ‘upsets established hierarchical narratives that insist on the authority of England… for the dissemination of architectural modernity in the British Empire’. 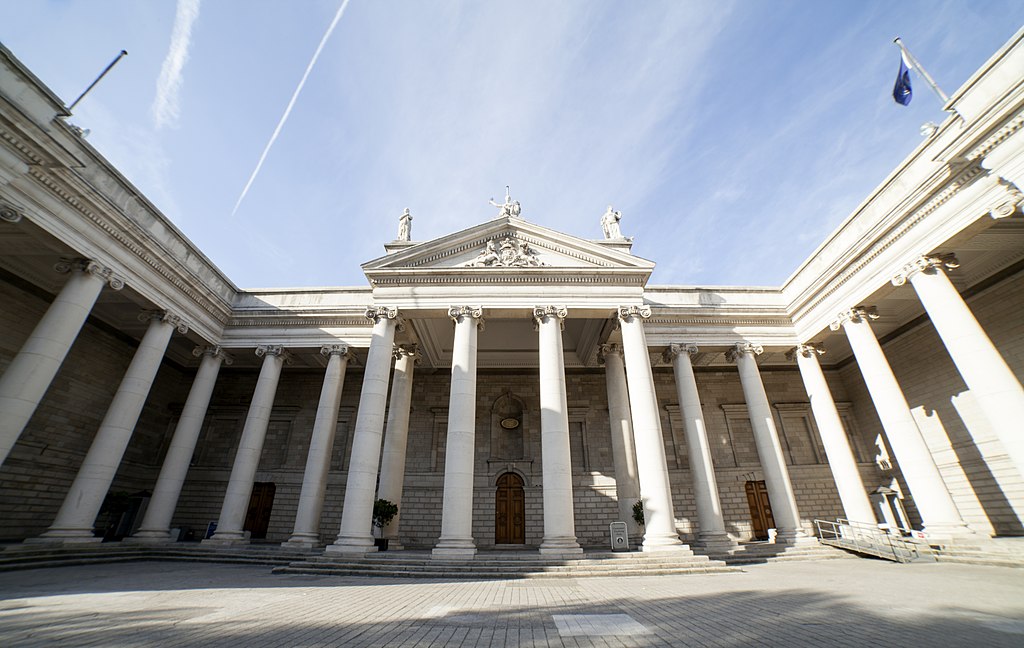 Accepting the many meanings of the Parliament House which may be construed or embroidered, we must still confront the astonishing material achievement of the building not least 34 giant columns of Portland stone just under 10 metres high which constitute the ceremonial colonnade and portico. While Portland stone was the material of choice for classical architecture in the period, in the Dublin Parliament House it is combined with extensive use of local granite. This reflects a burgeoning economic patriotism which favoured national resources in textiles, coinage, and building. The solution of combining the soft pale fossilised limestone with the gritty crystalline granite of the neighbouring hills would have long lasting impact on the architecture of Dublin city. Stone rustication or vigorously treated masonry characterises the Parliament House and innumerable other buildings throughout the city. Executed in the granite of Parnell’s native Wicklow, they may have suggested a lithic simile to his biographer F.S.L. Lyons for his refusal to return to Magdalene following rustication for drunken behaviour in May 1869: ‘a counter-rejection’ wrote Lyons ‘which could come easily enough to one whose basic Wicklow granite had stubbornly resisted all those diverse and futile attempts to put an English polish on it’.

Quarried on hillsides south of Dublin the granite blocks were drawn on carts into the city. Transporting huge blocks of Portland Stone to Dublin was more problematic. The hero of my lockdown spent in a small county Louth coastal village was an 18th century mason named Thomas Roper, ‘guardian’ of the Portland quarries, whose surviving letters, scanned by the Bodleian Library, opened a whole new vista of Anglo-Irish building exchange in the period. Roper also had connections to Magdalene, to be discussed in the upcoming College Magazine. From the pier at Portland, Roper watched as blocks of stone and bespoke elements of classical buildings were loaded onto vessels of varying capacity captained by seafarers from England and Europe. Out in the Channel, ships loaded with stone were seized by pirates from Spain, wrecked by drunken captains or inclement weather, or safely guided across the Irish sea to eager stone merchants and master builders in Dublin.

The Four Courts followed the example of the Parliament House in combining local granite with Portland stone. Extensive fire damage to the building during the Civil War in 1922 destroyed centuries of the public records of Ireland and also severely damaged the giant Corinthian capitals. By then an intense politicisation of building materials had emerged. In the newly established Dáil Éireann questions were posed as to how much ‘foreign stone’ was being employed in reconstruction and how much native. In a post-revolutionary economic recession, the hard-pressed architects of the Office of Public Works tasked chose to make do and mend, inserting a steel beam around the rim of the dome and turning the damaged sides of the capitals inwards, thereby passing the problem to their more affluent successors. In the current decade of commemorations, the capitals are being conserved and where necessary remade in Portland stone. In the 1920s reconstruction of the Dublin Custom House, devastated by fire during the War of Independence, no makeshift procedures would do. Though the architects argued for reinstatement in Portland stone, the dome was rebuilt in native limestone. Its grey volume above the Portland façade is among the most eloquent material statements of Ireland’s revolutionary past.

The term Anglo-Irish is heavy in association but like stone has been amenable to dusting down and refashioning. It evokes an image of the Protestant ascendancy who instigated the great classical buildings of Dublin. But it also describes shared industrial, and creative processes which linked and continue to connect the craftsmen of London, Dublin and Portland. The architecture of Anglo-Ireland was the outcome of an Anglo-Irish building culture. Excellence in the building arts then, as now, knew no boundaries.

This article was first published in Magdalene Matters Spring/Summer 2022 Issue 52. 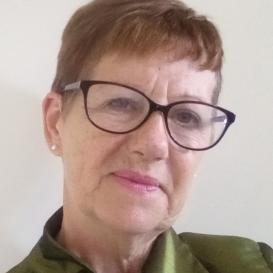 Professor Christine Casey is the Parnell Fellow at Magdalene. Christine is an architectural historian at Trinity College Dublin and is researching Anglo-Irish building culture of the eighteenth century.

This article was first published in Magdalene Matters Spring/Summer 2022 Issue 52.