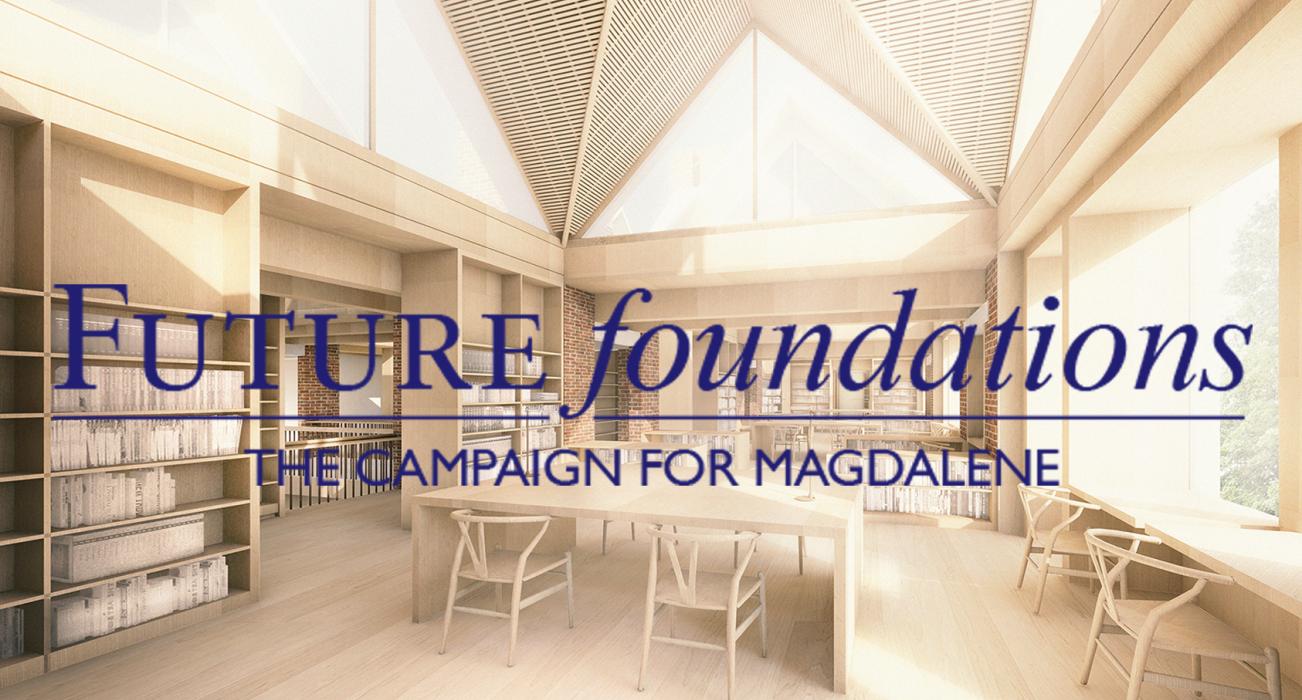 Future Foundations Campaign - One Year On

Future Foundations Campaign - One Year On

Fifteen months ago we launched the College’s most ambitious Capital Campaign, Future Foundations. After a whirlwind of activity and the warmest possible response, we are well on track to reach our goals.

Avid readers of the College’s publications will be aware that we launched a very ambitious fundraising campaign in March 2017. Our stated aim at the time is as true now as it was then, to ensure that our students have the best possible facilities and support here at Magdalene to enable them to succeed. Our commitment to academic excellence includes the provision of financial support, the best possible teaching and pastoral care and a new library building. It will offer spacious work areas with excellent IT facilities, a dedicated archive centre, an art gallery and a social hub for students, Fellows and visitors alike. The need for this additional building is particularly apparent this term when every available room throughout the College is used for extra study space for students. We also remain determined to conserve and enhance our historic estate and, once the new, state-of-the-art library has been built, we will be focussing on restoring the splendid Pepys Building.

We announced our target of £25 million a year ago knowing we had secured gifts and pledges worth £10 million in the period running up to the ‘public phase’ of the Campaign.

The gifts, the pledges, the warm response and the offers of help from the wider Magdalene community gave us the courage to believe we could raise such a huge sum – £25 million – in five years.

We were right! The College has received £18,426,733 (to 30 April 2018) for the Campaign in gifts and pledges, of which £13,690,355 is for The New Library. This truly fantastic result allows us to break ground for The New Library this September and to look forward to the open of The New Library building in two years’ time ready for Michaelmas 2020.

We have been most fortunate and are immensely grateful to have received a number of very large benefactions but are equally humbled by the generosity of the entire Magdalene community, as 1,505 Members have already contributed to the Campaign so far. Looking at the chart below, I hope you will agree that every gift, large and small, makes a very real difference to our success. Thank you!

We announced our target to raise £25 million over five years in March 2017 at the launch of the Campaign. One year on we have raised an astonishing 71% of our target!

Our progress so far

Thanks to the generous support of our donors we have raised £13.7 million towards The New Library, we have also raised almost £1 million for the support of undergraduate students, £800,000 for graduate student support and £2.9 million for general purposes allowing the College the flexibility to direct funds to where they are most needed.

Donations to support Future Foundations can be made until the end of the Campaign in 2022. All those who give over £1,000 in total (including Gift Aid) during the Campaign will be included on the Wall of Benefactors in The New Library.

Make a one off gift Make a regular gift